At the end of September I managed a quick trip over to England for my mother’s 87th Birthday. She’s not as mobile as she used to be but still manages with the aid of her walking frame to go short distances and she is lucky that my father is still athletic enough at ninety-one to push her about in the wheelchair. 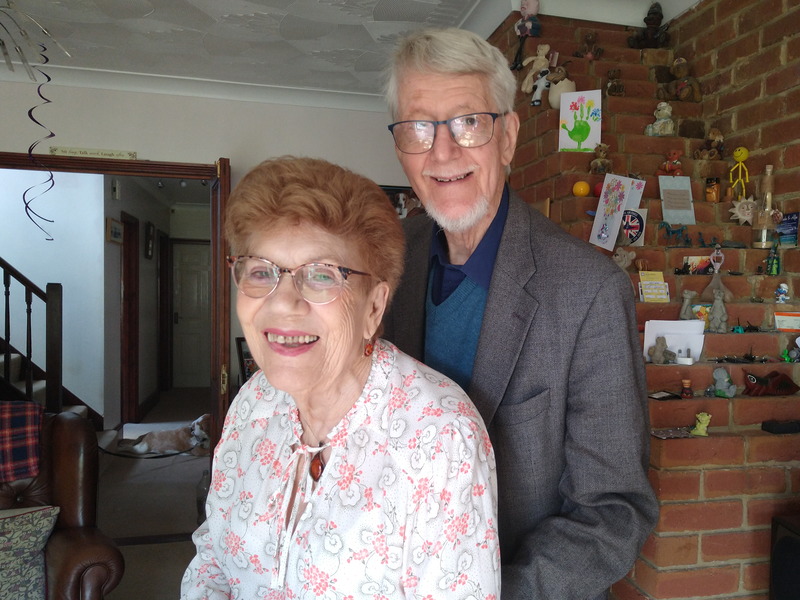 I took the pair of them off to the shopping centre at Hempstead as I needed to use my new Santander bank card. I did the pushing and along the flat and around Marks and Sparks it was easy enough, but across the car park and even short inclines it becomes hard enough.

Gave me the chance to show off the new car though the demo didn’t start well. I needed to pull my seat forward to allow for the wheelchair in the boot. That wasn’t a problem until I tried to pull away. I let the clutch out with my knee all but touching the steering wheel and we still weren’t moving. Lot’s of whirring engine but no movement. For a moment I was baffled until I remembered that I was much further forward ; up a bit more and we were away. Neighbours probably thought it was an old boy over revving.

It was a good thing that I made the trip when I did because, as we moved into October, Covid cases in France began to take off again. We had sort of expected that to become the case as the weather cooled and people started to mix indoors again but even so, the climbing figures would become increasingly dramatic.

Further studies on the vaccines had shown that their efficiency diminished in time and, more worryingly, a new variant called Omicron appeared to be not only highly contagious but also a variant that could be caught multiple times. A third dose of vaccine was now promoted by the government and in order to push its uptake, this rappel would soon become part of the Pass Sanitaire system. Having only the two previous doses would stop being sufficient six months after the second vaccination.

For the moment though we were not looking at a confinement and the hospitals were not under too much pressure — well, that might have been the case for the building but I am certain that the staff were looking forward to a future where they were not constantly being required to work such long hours. 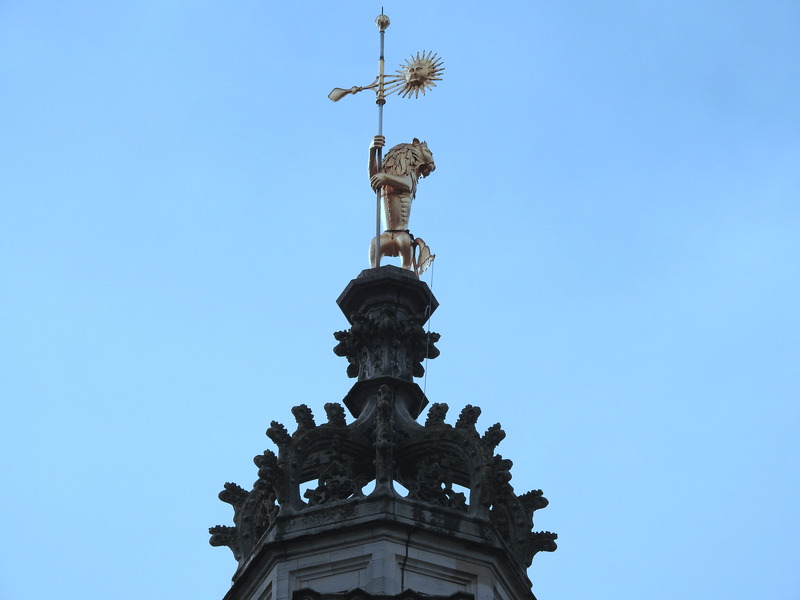 At the beginning of October the Marine Nationale took over part of the Arras Citadel complex as a training centre and information bureau. To mark the occasion their pipe band gave a concert in front of the Hôtel de ville on the Place des Héros.

The Bagad de Lann Bihoué is a group of musicians playing traditional Breton music. The primary instruments are bombardes, pipes and drums. The bombarde is an old form of oboe I suppose. The moment you hear it you think mediaeval.

A bagad is sort of the equivalent of a Scottish pipe band and Lann Bihoué was the name of the naval air base where it all began. All of the musicians are sailors though they are now recruited directly into the band — back in the days of conscription there were always players within the annual contingent.

As sailors they wear the distinctive pompon-rouge on their bachi (no it isn’t a béret !).

The set up was quite interesting. They were on the square in front of the Hôtel de ville and an area had been barricaded off for those of us who wanted to stand in front. To gain entry we had to have our passes and, although nobody seemed overly sure on the subject most of us remained masked, despite being outdoors. However along the sides of the square, where the road passes, people just gathered to watch. Sometimes the Covid measures do seem a bit futile.

The band played for about an hour and it was a fair mix of traditional music and some pieces that were a bit more pop music. I am quite happy to live without Amazing Grace but the French seem to expect it from pipe bands.

The weather started out a bit iffy but turned sunnier as the concert progressed. I was glad it didn’t get rained off because the Bagad is extremely popular and a chance to see them for free is not to be missed. 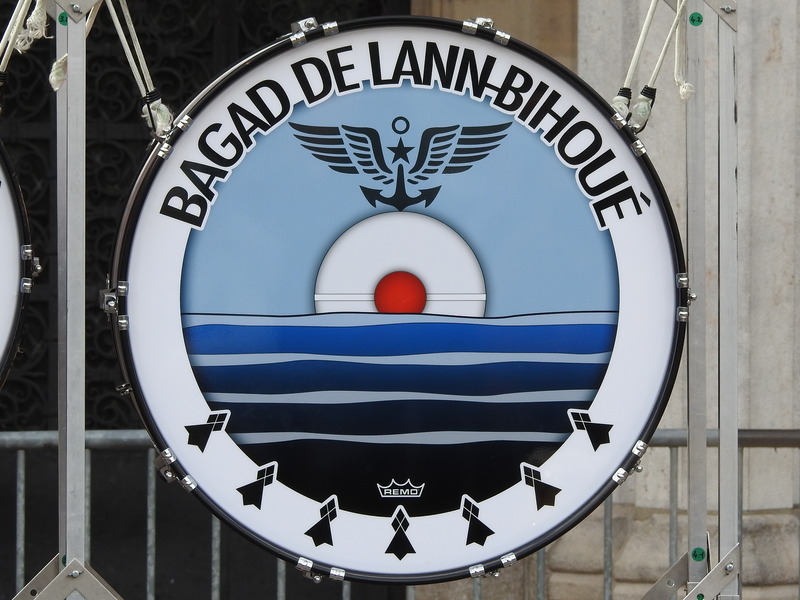 A winged anchor over water, bachi and ermine of Bretagne 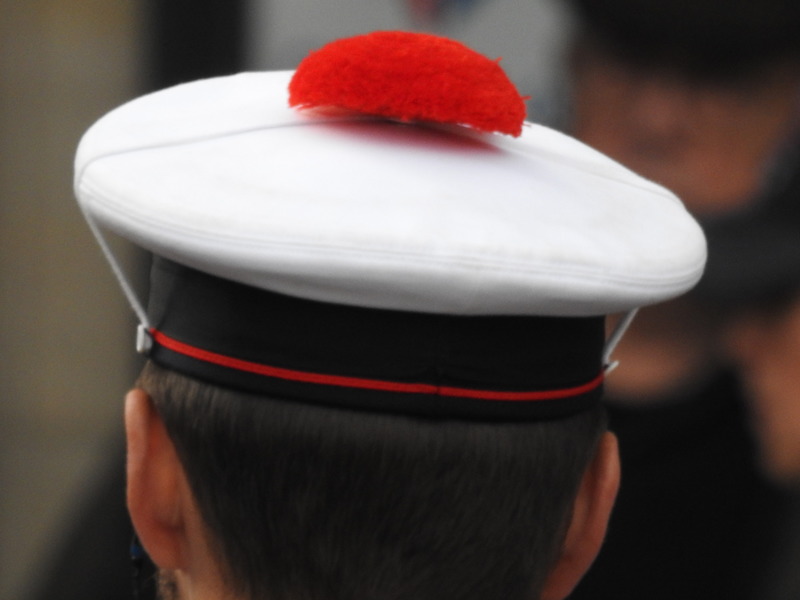 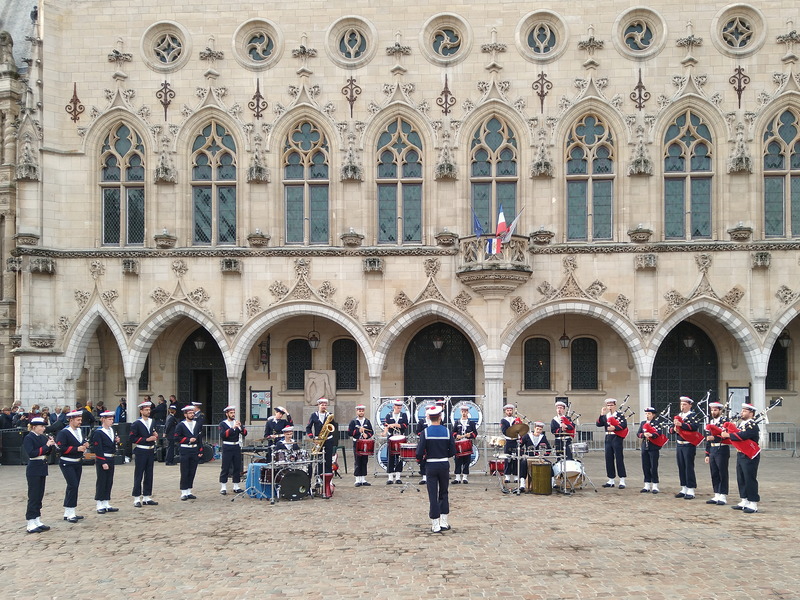 They played quite a mix of music over the hour